Gain insight into our Observability Tools 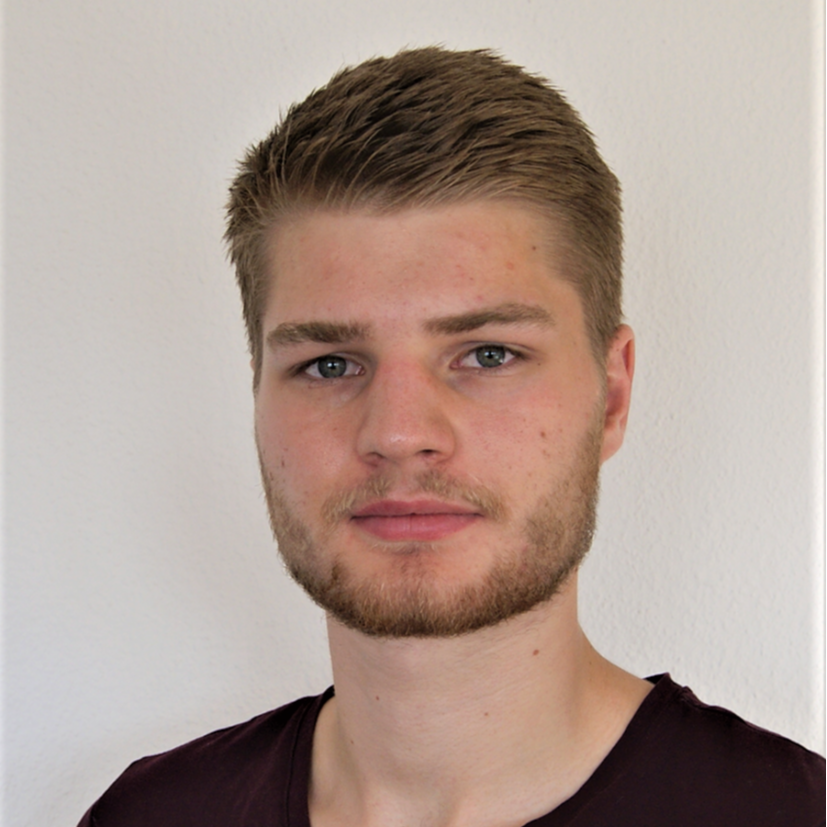 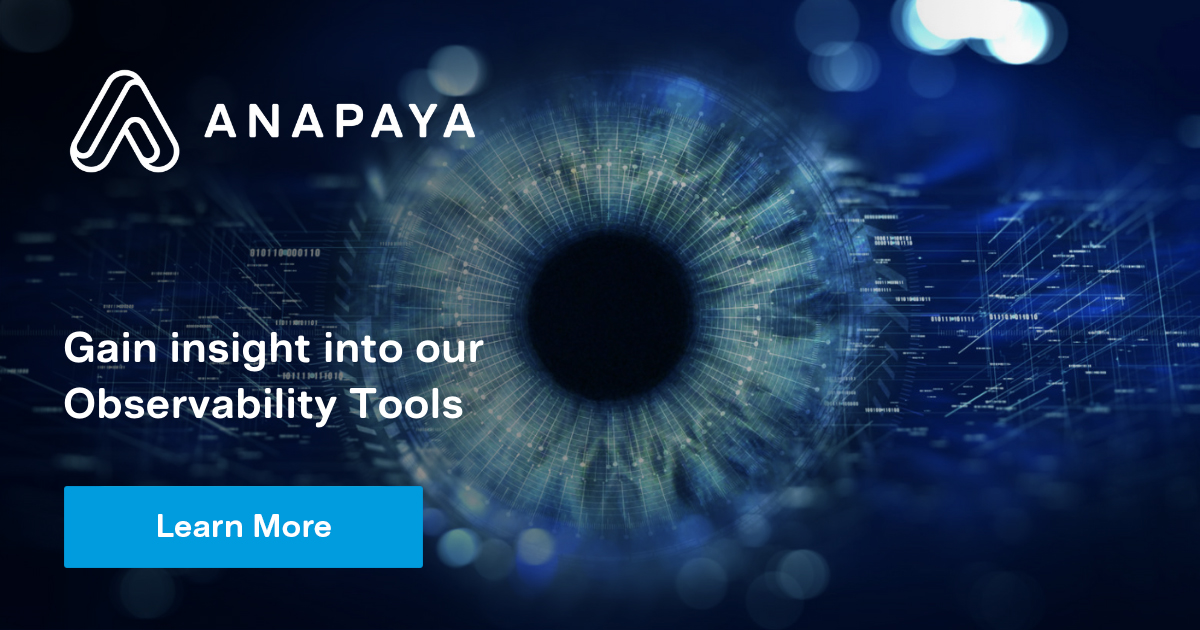 In this series of blogs or “dev journal”, we will cover some issues, challenges, and of course, small victories that we encounter while developing tools, services and features for SCION. Hopefully, this will grant you insights into our development processes and let you in on some tips and tricks we picked up along the way.

In this first installment, we will give a short introduction to observability, what observability tools we are using as part of our development process, and how our tooling has evolved over time.

SCION: One network, many participants

At Anapaya, we are committed to developing and delivering new features for our SCION services while making the services more robust at the same time. We, as engineers, often face the challenges that a distributed system inherently brings along during development and testing. While, in SCION, we are not running any large distributed system inside our Autonomous Systems (ASes) in the traditional sense, we are running a substantial amount of ASes as part of our testing and production topologies. This leads to multiple different processes interacting with each other over the network. As a result, there is a collective state in the system that cannot be observed by inspecting one single process on its own. For us, this means that when developing, we quickly reach the limits of traditional debugging techniques like step-through debugging or printf() debugging. This makes it quintessential for us to use tools that grant us insights into the many concurrently running processes in a centralized way.

In other words, we need observability in the running system. In the following, we will describe what observability is and how a system can be instrumented to be observable.

Observability Tools to the rescue

The term observability originated in control theory. It is a measure of how well a system's internal state can be inferred from the externally observable outputs. Observability has a similar meaning in software. Essentially, it is the art of making the software's internal state observable such that questions about performance, process interactions and causes of failure can be answered. The underlying goal is to optimize and streamline any potential investigation process.

Observability has become an increasingly popular concept in recent years. With the rise of modern distributed applications, a suite of observability tools has been developed to support software engineers and operators to gain insight into these highly complex, multi-layered architectures. These insights are crucial to understanding causes of failure and performance bottlenecks. They are an invaluable tool for operators that respond to incidents, and they make it possible for software engineers to assess the most taxing bottlenecks and address them accordingly.

The first pillar of observability is founded by metrics, which capture and describe quantitative data about running application processes. Metrics are a collection of statistics and aggregates that enable engineers to understand the overall behavior of the system and its usages. Metrics are typically collected and stored in time series which makes it easy to analyze and query them.

Some examples of questions that can be understood using the collected metrics are:

Metrics are also fundamental to monitor the health of a system and create alerts when unexpected characteristics are observed. For example, metrics can demonstrate unusual request latencies, atypical resource usages, or increased error rates.

The second pillar of observability is logging, which captures discrete events and makes them accessible as text or structural data. A discrete event could for example be an incoming request on a web server or a failed database access. Logging helps engineers comprehend what events occurred when running an application. Where and how these logs are stored depends on the use case. Traditionally, logging events have been stored in log files on the local file system. Alternatively, log events can be aggregated centrally which makes them easier to access, search, and correlate. There are many different flavors of logging, ranging from quick print statements that are introduced in a debugging session, to more permanent logging statements that respect logging conventions.

The final pillar of observability is distributed tracing, which captures the flow of requests through different applications by capturing certain events and collecting them with the right metadata, correlating these events across the whole system. As a result, it is possible to track exactly what each individual application is doing while processing a given request. This makes it possible to ask and answer questions about individual interactions, contrary to metrics that operate on aggregates.

Our observability stack for development

In order to get a fast feedback loop that guides us when developing our software, we use a suite of tests that operates at different levels. From unit tests, which test individual code units, over integration tests, which tests whether different components integrate correctly with each other, to full-fledged quality assurance tests which operate in a simulated production environment.

As part of this test suite, we have a set of tests that operate on a lightweight docker-compose-based SCION topology. In this topology, we run all the control and data plane SCION services as docker containers. They are connected through the regular docker networking stack. This allows us to abstract away the more annoying details that we need to model for our full-fledged topologies. For example, we do not need to worry about the operating system of the individual hosts that run the services or how the hosts are connected physically in our docker-compose-based topologies.

This testing topology is so lightweight that it runs locally on the developer's machine and can be spun up in a couple of seconds. It is targeted at testing the interaction between running SCION services and analyzing their communication patterns. Some of our topologies run hundreds of SCION-related processes because they are composed of many SCION ASes that each run multiple different processes. With this sheer amount of moving parts, we need tools that help us aggregate information and allow us to quickly analyze where problems occur and what causes them.

Our current development observability stack is a combination of all three pillars that we described before. It is composed of the following tools: 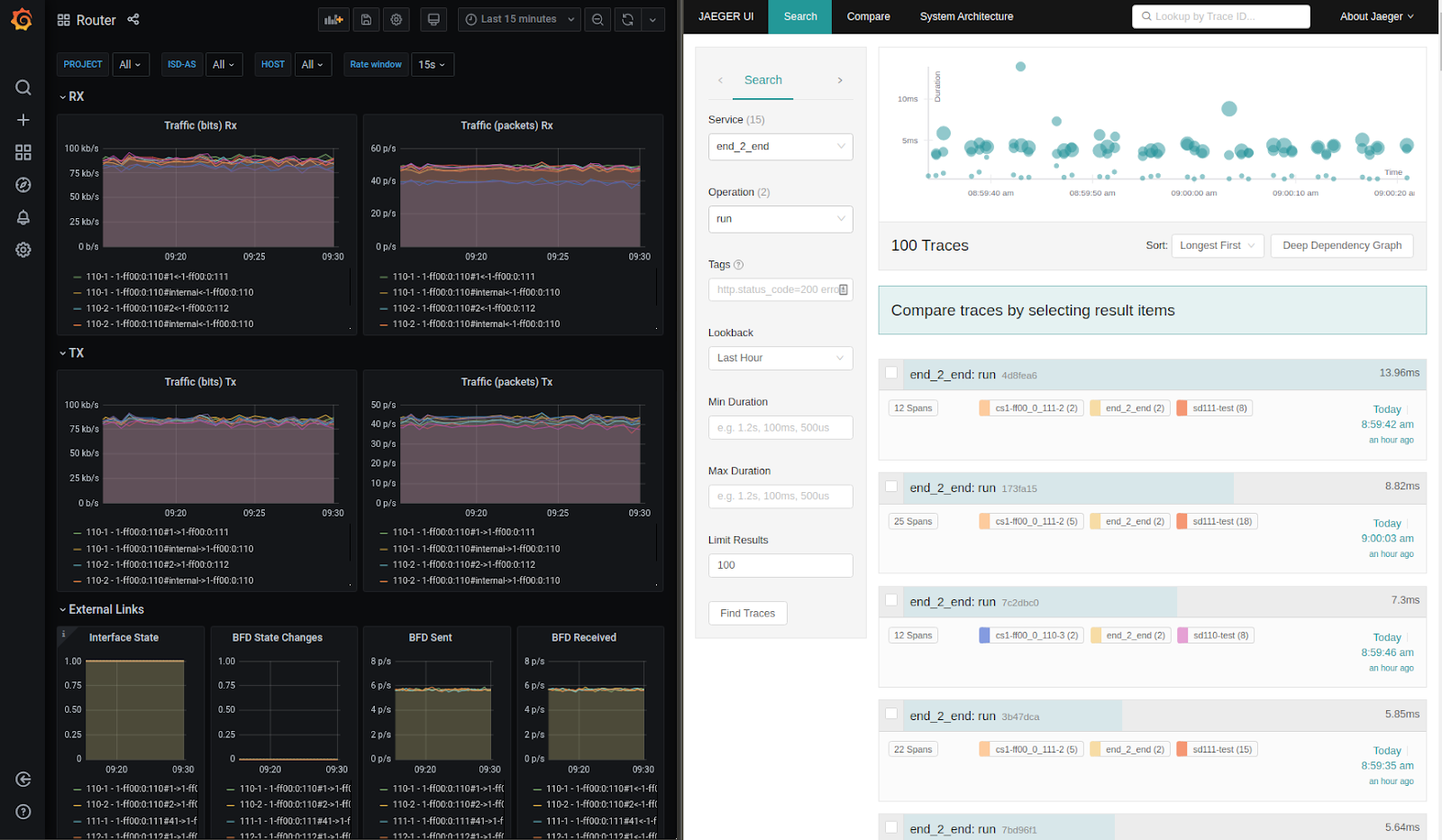 The figure displays grafana with a provisioned dashboard on the left side. The dashboard displays graphs related to the SCION router. On the right side, the jaeger UI is displayed. It shows an overview of the last 100 traces from our end-to-end tests sorted by decreasing execution time.

We consciously decided to use the same tools that we use in production as part of our observability stack for development. While configuration and setup are slightly different between the docker-compose-based testing topology and actual production, the interactions with the different components are exactly the same. This gives us familiarity with the tools across all teams. The goal is to have developers that are familiar and proficient with the tools that we use in production when an incident is escalated to them. Thus they are able to swiftly jump into the investigation without learning the tools first.

This combination of observability tools is very powerful for our different development workflows, but of course, this is not the set of tools we originally started out with. Our observability stack has grown with time and experience and we picked up a few tricks along the way which we share below.

In the beginning, our services exposed metrics mostly for the sake of our production deployment. Alerting and monitoring of the deployed services were based on these early metrics, but they were not integrated into the regular development workflow. The major problem here was that, while writing code, developers often did not consider what metrics could be useful. As a result, metrics were patched as an afterthought upon request from our operations team.

Today, we believe that developers actually have the best situational awareness to decide what metrics should be exposed by the component they are working on. They know exactly what the purpose of the component is, how it is implemented, and how it interacts with other components in the system. They also have a better understanding of what information will be crucial to understand the state of their component when investigating incidents. We made it our objective to think of metrics as first-class citizens during the development cycle. This is reflected in how we instrument code with metrics, and how the instrumentation pattern evolved over time. Unfortunately, this is beyond the scope of this blog post and will be touched on in a future installment. This paradigm shift also is reflected in how the testing topologies are set up for development. We added prometheus and grafana instances in our testing topologies to give our developers the same tools available in production. Thus, they can experience the metrics they expose in their component firsthand and early in the development cycle by spinning up the lightweight testing topology. This method proves to be effective, as the requests for missing metrics have gone down significantly.

We had a similar evolution for our approach to logging. Initially, we were missing an efficient way of correlating different log events with each other. We had some tooling to compose multiple log files into one single file by interleaving the log events according to their timestamps, but that addressed only a small part of the problem. It was still hard to assess what log events belong to the same execution trace. Both intra- and inter-process correlation took quite a bit of brainpower, intrinsic knowledge of the whole code base, and a lot of time. Correlating logs is the bread and butter of understanding the causal relationship of events that happen in a system. As such this is very important to understand the causes for a misbehaving system. 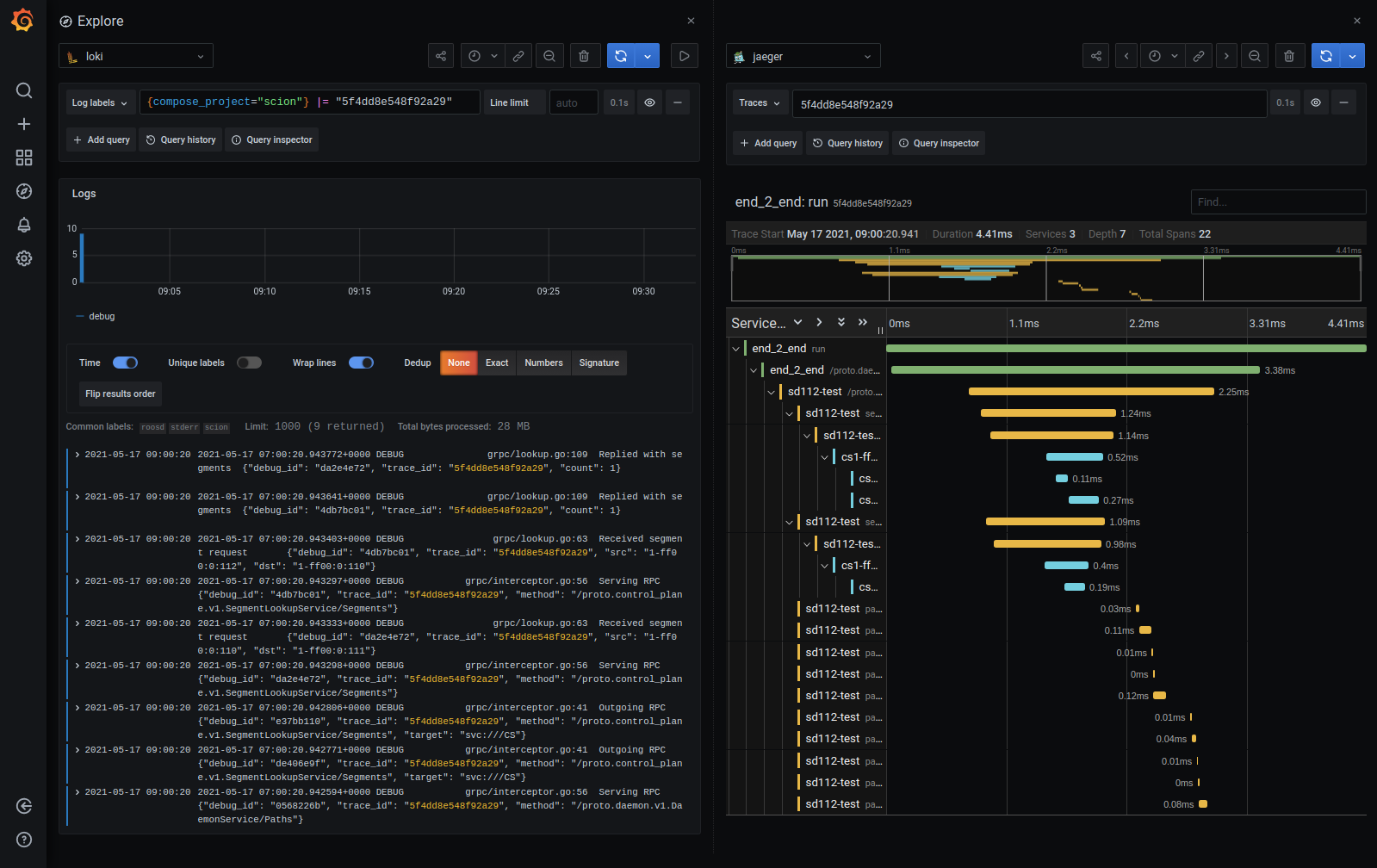 The figure displays grafana in exploration mode. On the left side, we see all the logs that are part of the requested trace identifier. On the right side, we see the whole execution trace across all services in a visual representation.

Here, the combination of jaeger, loki and grafana shine. We can filter log events with LogQL such that only events of the same trace are displayed. Furthermore, we can visually inspect the execution trace across the whole system with the click of a button.

This combination of jaeger, loki and grafana has been a great productivity boost. Gone are the days of manually combing through the individual log files and searching for clues about what might be wrong with the system. However, there are always opportunities to optimize and automate processes. For example, we are intrigued by the approach OpenTelemetry takes and might think about how this fits into our system. I'm excited to see where this journey leads us.

Click here, if you want to learn more about the benefits of SCION technology. Or you can contact us directly. We're happy to talk, any time.

Posted by Lisa Garbe, Nov 17, 2020
As indicated by a report by the Citizen Lab, at least 45 countries worldwide use the commercial spyware Pegasus, many of ...
Read More

Posted by Mateusz Kowalski, Mar 04, 2021
What is wrong with the Internet today? Over the past years, people have become more aware of security and privacy issues. ...
Read More