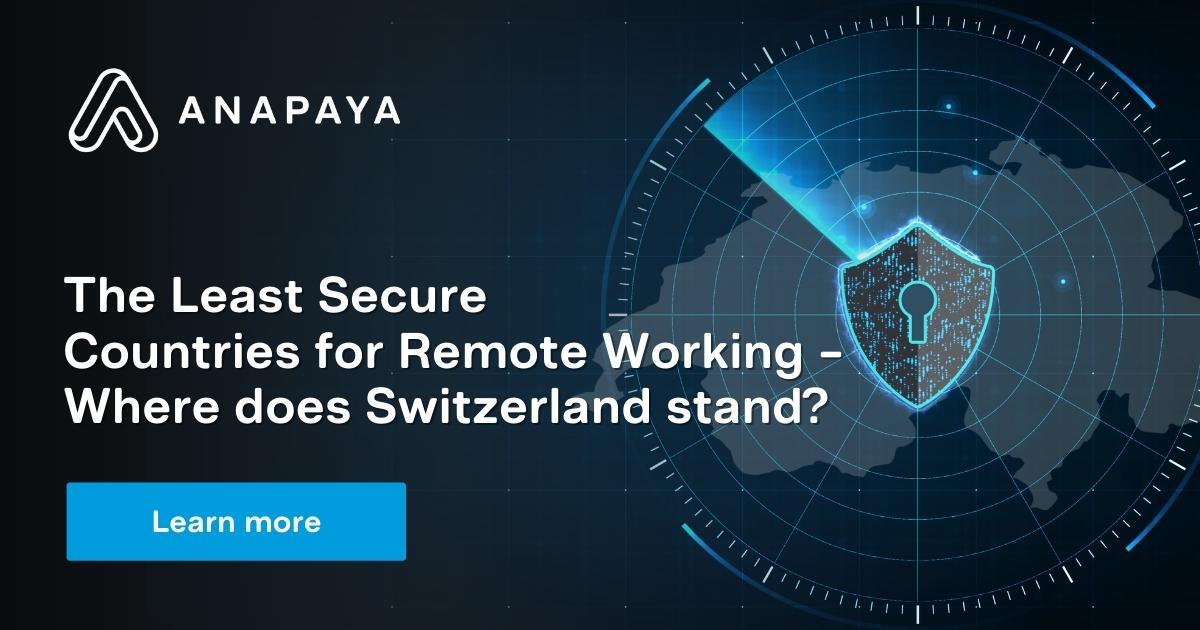 It’s a new year, with new opportunities - but also new threats, if the research is to be believed.

According to Mckinsey, the current growth rate of cyber threats will amount to about $10.5 trillion annually by 2025—a 300 percent increase from 2015 levels. To make matters worse, nearly 80% of the cybercriminal groups operating since 2021, and 40% of attacks were never seen before.

With businesses of all sizes being at risk and the exponential adoption of remote work policies, you may be wondering if anywhere is safe. In this blog, we’ll explore which countries of the world are experiencing the most cybercrime, where Switzerland stands and what it means for a remote work economy.

Reboot Digital conducted research based on over 90 Microsoft Security Intelligence reports to collate the most at-risk countries around the world. They evaluated a combination of DDoS attacks, botnet organizations, phishing sites, malware hosts and compromised systems in each country which could prove detrimental to online users.

Below, we’ll highlight some of the more interesting findings.

The countries most at risk when it comes to cybercrime are:

The countries above all showed the highest amount of compromised computers and malware hosting sites. This may come as a shock to many, considering Indonesia is a hotbed for remote workers, recently going as far as to offer a five-year digital nomad visa.

It is also interesting to note that China and Russia, which are well-known originators of BGP hijacking and DDoS attacks, are not featured in the top ten. However, both countries are in the top 3 when it comes to malware hosting, with China taking the top spot.

Check out our section below on ‘what it means for you’ for more information on this.

The 10 Most Secure Countries for Remote Working

The countries responsible for the least amount of cybercrime are:

Finland hosts fewer than 300 phishing sites and only 11 compromised computers per 100,000 internet users, making it the most secure location for your data. Switzerland just edges in the number 10 position, with a mediocre amount of phishing and malware hosting sites, but an incredibly low number of compromised computers, coming in at just 17 per 100,000 (0.02%) internet users being bad actors.

Mexico may be a surprise to many, but it should be noted that it only earns the spot due to its extremely low amount of phishing websites, having the second lowest on the list after Guatemala. On the other hand, it still has a large number of compromised computers, standing at 1,948 for every 100,000, nearly half the amount of the most compromised computers in the research, Tunisia.

A Closer Look at Switzerland

As you can see from the above, Switzerland is the tenth most secure country when it comes to cybercrime. In this section, we’ll take a closer look at how it’s performing according to the metrics of the study.

Drive-by download pages are web pages that make your computer download data unintentionally. This opens your computer to attack. In general, it is a strong indicator of a website owner with nefarious intentions.

For every 100,000 web pages, Switzerland has one drive-by download page. This is an excellent sign that most Swiss website owners are acting in good faith. It also means that if you’re visiting a website with .ch, you’re likely not going to be downloading any files without your knowledge.

Phishing is as old as the internet. Thankfully, phishing requires action on behalf of the user to initiate the attack, unlike DDoS and BGP attacks which can happen without the knowledge of the victim.

In Switzerland, there are 460 phishing websites for every 100,000 that operate within its jurisdiction. This is the highest amongst the top ten most secure countries, following Norway with 340.

Switzerland hosts 470 malware sites for every 100,000 .ch web pages. While this is still relatively low compared to other countries, it only beats Norway, which has 490 malware sites per 100,000. Despite this, when working from home or using the internet, Swiss users should always be suspicious of downloadable software or applications.

On the low end of even the most secure countries, Switzerland only has 17 compromised computers per 100,000 internet users. This means that botnet attacks that hit the country are most likely occurring beyond its borders.

Of the top ten most secure countries, Switzerland comes in 4th position of the least compromised computers. However, in an age where connectivity is a necessity and borders mean very little on the internet, what does this mean for remote workers and organizational security?

What it means for you

While Switzerland claims a spot in the top ten most digitally secure countries, it doesn’t mean you can rest easy. Due to the nature of how the internet works through the border gateway protocol (BGP), your data travels through multiple countries before reaching its destination. This includes known BGP hijackers, such as Russia and China, as well as the least secure countries listed here, like Indonesia and Malaysia.

Unfortunately, when it comes to the BGP, security is not a priority. It simply selects the most efficient path based on the information it receives - and much of this information is fed by cybercriminals. However, this doesn’t mean that the above information is null and void. All you need is the ability to control where you and your remote worker data travels to keep it as safe as possible.

How SCiON can help

SCiON is a new way for businesses to access the power of the internet safely and securely. It enables users to control their data paths with geofencing capabilities. This means that you can avoid areas that are typically associated with cybercrime, keeping your data safe and your remote work productive.

Unlike the BGP, which selects based solely on efficiency, SCiON lets you choose based on parameters that are important to you - like security. Now, with SCiON, you can utilize remote working policies without fear of cyberattacks like BGP hijacking or DDoS attacks.

With SCiON, remote workers can access critical resources and company connectivity wherever they are and whenever they need it. It protects them and your data from malicious cybercriminals and prevents your data from travelling through risky locations.

If you would like to find out more about SCiON, visit our SCiON page or contact us for more information.

Posted by Anapaya, Dec 15, 2020
Anapaya welcomes Pascal Rialland as chairman of the board of directors. The current chairman, Adrian Perrig, will continue ...